Discuss and learn from each others Remote Viewing experiences.

I have no idea about this one, but it does sound interesting, especially as somone we know from the Military is involved

The idea of a government agency controlling people with special abilities for military and/or intelligence uses is in fact inspired by real-life experiments of the US government, particularly the long-running Stargate Project.

This is taken from some promo page

You think government-trained psychic spies are a bunch of hooey? Col. John Alexander would like to politely disagree.
In the movie Push, civilians with psychic powerspeople who can manipulate thoughts, see the future, or toss objects with their mindsfind themselves on the run from a shadowy government agency intent on using their beautiful minds for military purposes. Pure Hollywood hokum, right? Slow down.
Retired Army Colonel John Alexanderonce a Special Forces commander in Vietnamknows differently. You see, he was once one of the key members of Stargatea U.S. intelligence agency designed to prove that psychics could be more effective Cold War weapons than spy satellites or wire taps. The most unsettling part? He was right... 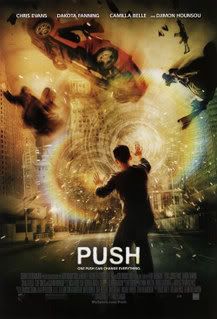